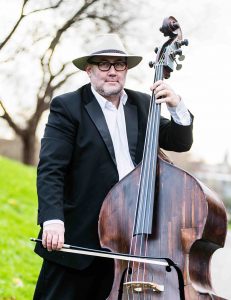 Paul is a double bass virtuoso most commonly found trying not to play too many notes while trying to provide subtle but firm underpinning to many different styles of music. He has performed on the Klezmer/Balkan circuit since 2000, including playing with Szapora, Gregori Schechter’s Wondering Few and Monooka’s Caravan. He was a friend and irregular member of She’Koyokh for many years, finally joining the band in 2015. Paul also performs jazz and musicals across London, the UK, Europe and the World. He appears on the upcoming album by Taeko Kunishima on 33 Records. Paul is a composer and arranger in many styles of music as well and is proud to be an educator teaching young and old musicians.