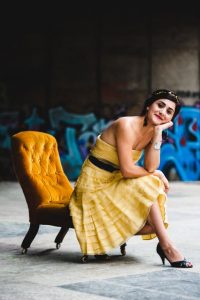 Çiğdem Aslan is an Istanbul-born singer who sings in many languages and regional styles, including Turkish, Kurdish, Greek, Bosnian, Bulgarian, Roma, and Ladino. Her musical journey started within the family. Coming from Kurdish Alevi background, in which music is one of the pivotal elements of the culture, she grew up with the rich sounds of her culture and then gradually met with the other sounds of Istanbul and beyond. Her debut solo album, ‘Mortissa’ won the prestigious “Preis der Deutschen Schallplattenkritik” German Record Critics Award and remained in the top ten of the World Music Charts in Europe for several months. It was chosen as one of the best albums of 2013 by fROOTS and was shortlisted for ‘Best Artist’ in the Songlines Music Awards 2014. Her second album, ‘A Thousand Cranes’ is to be released in October 2016.