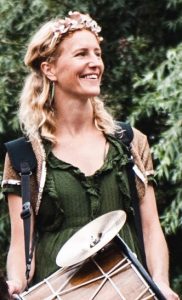 Initially drawn towards Eastern European music during her degree at Goldsmiths University (BMus in Composition and Studio Composition, 2002), Christina took up studies in Bulgarian percussion at the Plovdiv Music Academy with Mitko Popov, arranger and drummer of the world-famous Trakia Ensemble, in 2014.

Christina is also a committed member of Veda Slovena Bulgarian Choir since it’s formation in 2013, having performed at the Purcell room amongst other venues, and as part of collaborative projects such as Voices Now and Choir of the Year 2015.

As a composer, Christina records and produces her own songs, which include modern arrangements of traditional tunes. She also plays flutes in Tinkers Bubble Ceilidh Band.